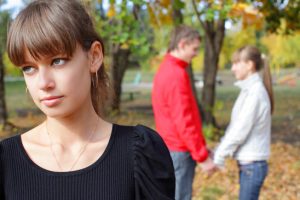 Cheating Spouses and Oregon Divorce: What impact will it have on my divorce?

No doubt about it, divorces are an minefield of charged emotions. Often making a difficult situation harder is the suspicion or knowledge of infidelity within the marriage. A common question asked by existing or potential clients is whether proof of the infidelity will help gain an upper hand in the divorce. The short and largely complete answer in the state of Oregon is this: “It makes no difference.”

Oregon is referred to a as a “no-fault” state. This means that Oregon’s laws do not require any reason for a court to grant a divorce other than the request of one party. Generally this reason is stated blandly as “irreconcilable differences” which lead to the “irremediable breakdown” of the marriage. The court does not required proof of what these “irreconcilable differences” are, so it is sufficient that one party simply does not want to be married any longer, whatever the reason.

§ 107.025 Irreconcilable differences as grounds for dissolution or separation

(1) A judgment for the dissolution of a marriage or a permanent or unlimited separation may be rendered when irreconcilable differences between the parties have caused the irremediable breakdown of the marriage.

(2) A judgment for separation may be rendered when:
(a) Irreconcilable differences between the parties have caused a temporary or unlimited breakdown of the marriage;
(b) The parties make and file with the court an agreement suspending for a period not less than one year their obligation to live together as husband and wife, and the court finds such agreement to be just and equitable; or
(c) Irreconcilable differences exist between the parties and the continuation of their status as married persons preserves or protects legal, financial, social or religious interest.

Evidence of infidelity will almost never be heard by a judge. In some circumstances, the relationship can become relevant if it relates to finances and the marital estate. For instance, if husband depletes the marital estate by purchasing expensive jewelry, vehicles, or gifts for a mistress, the financial aspect can become relevant. However, the behavioral act of the infidelity should not be considered by the court.

It is often unfortunate news to potential clients to learn that their spouse will not be “held accountable” by the court for their emotionally hurtful behavior. However, as a social policy the no-fault standard of Oregon is, in my opinion, a good thing. By making infidelity and other such behavior legally irrelevant, parties are not put in a position of investigating and having their marital “dirty laundry” aired in court. Court can be contentious enough without the added embarrassment of facing a public airing of all of the parties’ most intimate secrets.

Contact one of our Portland divorce attorneys today to discuss the facts of your case.