Can the court make a spouse pay attorney fees? 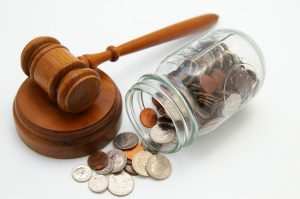 There’s no way around it: Oregon divorce and family law cases can be expensive. No only do you often have attorney fees associated with each side, but often a single household is being divided into two separated households. This can result in new costs in the form of newly required rent, utilities, groceries, etc. Clients often ask “can the court make a spouse pay attorney fees?” in an effort to limit their own personal financial exposure.

As in most areas of the law, the answer to this question is “maybe.” The law in Oregon divorce and family law cases does allow the court to award one party all or a portion of their attorney fees associated with their case. That said, it tends to be the exception rather than the rule that such fees are awarded, and the circumstances where a court actually awards the fees are limited.

There are a couple of common circumstances where the court does actually does make a spouse pay attorney fees. Judges generally start with the assumption that each side will pay their own attorney fees. However, if one side controls all of the marital assets in a case, the court can award “suit money” to allow the other side the benefit of counsel. For example, consider a case where husband is a stay-at-home father while wife works and controls all of the marital assets. Should wife decide to “cut off” husband during a divorce, the court may award husband temporary “suit money” so that he can gain the same benefit of an attorney as wife.

The second circumstance where the court will sometimes make a spouse pay attorney fees is when a party has behaved poorly during the course of a divorce. These fees are generally awarded after the case is complete, when a party applies to the court under ORCP 68 (note that the rules for ORCP 68 have timelines and procedures that must be followed to secure a potential recovery of attorney fees – you should consult with an attorney to discuss these technicalities).

When applied for, the law says the court must look at specific factors:

(2) A court shall consider the factors specified in subsection (1) of this section in determining the amount of an award of attorney fees in any case in which an award of attorney fees is authorized or required by statute. In addition, the court shall consider the following factors in determining the amount of an award of attorney fees in those cases:
(a) The time and labor required in the proceeding, the novelty and difficulty of the questions involved in the proceeding and the skill needed to properly perform the legal services.
(b) The likelihood, if apparent to the client, that the acceptance of the particular employment by the attorney would preclude the attorney from taking other cases.
(c) The fee customarily charged in the locality for similar legal services.
(d) The amount involved in the controversy and the results obtained.
(e) The time limitations imposed by the client or the circumstances of the case.
(f) The nature and length of the attorney’s professional relationship with the client.
(g) The experience, reputation and ability of the attorney performing the services.
(h) Whether the fee of the attorney is fixed or contingent.

(4) Nothing in this section authorizes the award of an attorney fee in excess of a reasonable attorney fee.

Again, as s general rule courts are reluctant to assess attorney fees against one party for the benefit of another even though they have the authority to do so. If they do, it must be in consideration of the factors listed above by Oregon statute (ORS 20.075). It is this firm’s experience that judges will tend to award fees when one party or their attorney has made the legal process unreasonably long, taken unreasonable legal positions, or taken unethical or factually unsupported positions during the course of the case. When both sides have acted reasonably and in good faith throughout the case, there is a much lower chance of the court awarding attorney fees.

The rules and timelines surrounding an attorney fee award require adherence to the rules. You should consult with a qualified family law lawyer to discuss the process.